A lot of activities able to meet needs and expectations of children and their families: accommodation, catering, museums, nature and more.
Ph. credit ATL Alexala 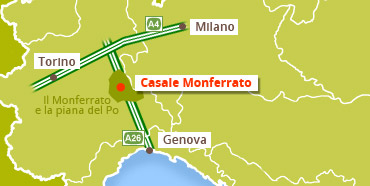 Monferrato and the Po Plain

For centuries Monferrato has driven back foreigners, enemies, invaders with its military power, today , quite ironically, it attracts tourists from all over Italy and the world, welcoming the pacific assault of the visitors who want to discover the glorious past history and the great present of this area.

The first to unify and rule the territory was Aleramo, from 967 to 991. Many dynasties in Piedmont and Liguria come from him. On his death the territories went to his son Anselmo.

In 1111 Monferrato became a Marquisate under marquess Ranieri I. The marquisate was at his best with Guglielmo VI, the great marquess, who expanded his properties and became Captain of Milan and Lord of several towns in Northern Italy, including Pavia. On his death, the importance of the marquisate declined, until Teodoro Paleologo inherited it.

His successor, Teodoro II, enlarged the marquisate and went as far as Genoa . The Paleologi family ruled Monferrato for many years and in 1434 Casale became the capital of the marquisate, after the loss of Chivasso. When the last male heir of the Paleologi family died, the territory was disputed between Federico II Gonzaga, who had married Margherita Paleologa, and Carlo III of Savoy. Emperor Carlo V decided in favour of Federico Gonzaga. At the beginning of 1700 Monferrato was devastated by the Spanish War of Succession and in 1708 the territory was given to Vittorio Amedeo of Savoy. From this moment the history of Monferrato becomes one with the history of Piedmont

During the wars of independence against the Austrians, Casale and Monferrato had an important role in fighting for the national unity. Casale was rewarded with a gold medal for the strenuous resistance against the Austrian enemies Much of this glorious historic past is still visible today, but Monferrato is also well aware that the best of its history lies in the future and in its wonderful landscape, food and wines, and everyday life that the visitors can discover and appreciate in this area Next to Monferrato , Lomellina is one more small great interesting territory of the Po Valley, wrapped in the fog and in the green fields. Nature is its main characteristic: the thick woods have been well known for centuries , a hunting place for the amusement of the Lords of Milan

In the Middle Age, because of the close relation with Pavia, the Lomellina area became important, especially thank the Counts of Lomello who became also Counts of Pavia, though only for a short time. In XVII century Lomellina enjoyed a certain independence in the State of Milan.

In 1858, as soon as the Austrians were defeated, Lomellina and the Oltrepo joined the Pavia province , just before the unification of Italy took place.